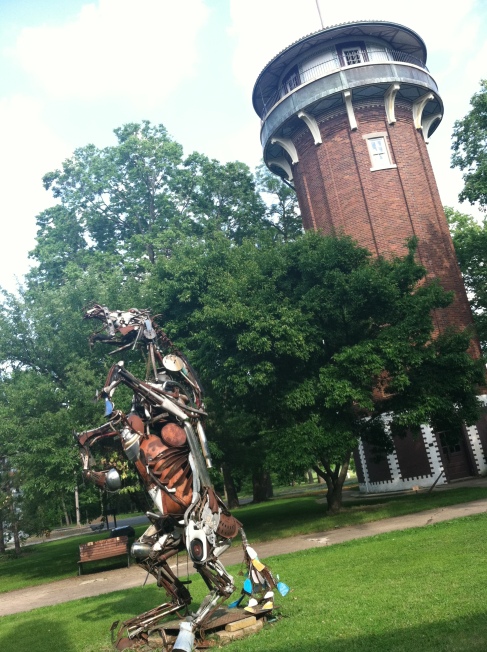 Here is a blog post I wrote earlier this month but didn’t get to post until now. There’s no wireless here at the Anderson Center.

I have been neglecting this blog and my writing in general for several months now, but today, I am in the top of an old water tower that has been converted into a writing studio. At the beginning of June, I arrived for a residency at the Anderson Center for the Arts in Red Wing, Minnesota. The Center was originally used as a working farm and research laboratory for experiments on everything from cereal to robotic arms that were used to handle uranium, but now it functions as a thriving artists’ community: home to Red Dragonfly Press, many painting and printmaking studios, and to me and four other residents for the next month.  We are staying in a lovely old house with hand-painted ceilings, dark wood trim, and lots of great little book nooks & places to write.

On a jog along the Cannon Valley Trail this morning, I heard a lovely whoosh—something like damp sheets flapping on a laundry line—and glanced over to see a blue heron taking off downstream. Summer is just beginning here, and I feel the way that I always feel when I go someplace new: I want to know the names of things. Out of the window right now, I can see the pointy tops of pine trees, a variety that we don’t have in North Carolina. I’ve seen something like them in Maine though. What are they called?

While here, I am hoping to finish the book of poetry that I have been working on for the last five years. I have a plan. I have inventoried all of my poems. There are 46, but of the 46, around half are flops that have some vaguely redeeming qualities. I am going to take a pair of scissors, cut out the salvageable lines—like harvesting organs, I think—and see if I can collage them into some little Frankenstein poems.

And then there are the ideas for new poems that I have been meaning to get to. During the academic year, I don’t usually have much mental energy left for my own writing, so I keep a running list in my phone of the ideas that I get. I like to think of it like putting them in an incubator. Currently, there are 29. And even if I don’t get to all of them this month, I think I have a decent shot of finally finishing this thing before the summer’s end. It’s a good feeling!